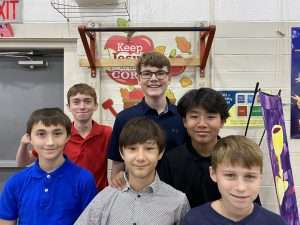 St. Malachy School’s inaugural Esports team met and exceeded expectations.  These six boys spent many evenings practicing for the weekly tournament playing Rocket League on Thursday nights.  Ethan Anderson our foodservice assistant excitingly agreed to coach an Esports team at St. Malachy last spring.  He decided to start simple with 7th & 8th-grade students who were interested just to see how the first season would go.  At the end of the season, the boys ended up placing 15th out of over 200 other middle school Esports teams.  We were in shock and soon discovered our boys were going to the playoffs!  We are so pleased with the momentum our team gained this first season.  In the spring we will be adding 5th and 6th-grade students to the team.

Saint of the Day